You are very welcome, Jane, please introduce yourself:

I have been writing for the last 5 years. Marrying a rock musician when still quite young, and to help support our family, I worked at the Foreign and Commonwealth Office in Whitehall where I indulged my love of mystery and intrigue. Later working in the International Music Industry managing recording artists, songwriters, record producers and actors, based mainly in Los Angeles, Singapore and Taipei, I began to garner information and experiences for my longed-for and much anticipated writing career. I read avidly and writing crime, sometimes with a touch of espionage and organised crime in the mix, reflects my love of this genre. I am published by Accent Press.

I always had my nose in a book as a child. It was my way of escaping a large family of so many younger siblings, who looked upon me as their other mother. When I could get time to myself, not that often, I would lose myself in Enid Blyton, Robert Louis Stevenson and similar writers.

I am an avid reader, always have been, but now time is an issue. I try to read a few chapters every night in bed. I used to read one or two books a week, but these days I seem to be able to manage only one per month. I do prefer books in my own genre. I adore reading crime/thrillers/mystery and espionage.  I find I like the books written mainly for men, though not exclusively I know. I have a TBR pile to panic even the most placid of folk.

I have a publisher although I am also free to go elsewhere with my work if they refuse anything for whatever reason, and so it (self-publishing) might be an option I’ll explore if that happens.

I have had work published (in anthologies) in aid of various charities and they are via whichever publisher or individual has invited me to participate. I enjoy doing short stories for them.

I write mainly crime and I suppose it is because it is what interests me the most and what I read mostly. I feel comfortable in this genre and I guess I must have a criminal mind, as I seem to find it easy enough to come up with dastardly deeds for my characters.

I do dabble in other genres if the story dictates. I have written humour and have turned my hand to a couple of Ghost stories for my publisher as well as one or two romances – as in pirate stories. I am not a romantic as a person so a full blown love story isn’t my thing. But, having said that, I have co-written with a long-term friend who is a successful romance writer, and our story could be called a ‘romance,’ but not in the strictest meaning. She is still writing her parts and our publisher is waiting to set a date for publication, probably 2017 now.

Agatha Christie of course, she’s had to have influenced every Crime and Golden Age of Detection writer going. I read a lot of Mickey Spillane, Raymond Chandler, Graham Greene, John Le Carre, and Fredrick Forsyth growing up so they had a huge influence on me. I adore Daphne Du Maurier too.

Latterly  I’ve read a lot of Patricia Cornwell and Michael Connolly (I adore his work) and Peter James, Peter Robinson, Nelson DeMille, Stella Rimington, Andy McNabb, Karin Slaughter, David Baldacci and Tess Gerritsen. I love so many authors in this genre it is hard to pick a favourite.

Kathy Reichs has been a huge influence and it is due to her real life role as a Forensic Anthropologist that I was minded to take some courses in Forensics, so that my writing would be accurate and up to date where modern technology is used in crime detection and the identification of the dead.

I am sure it has but to what extent I cannot say. I’ve spent my life living and working overseas. My family were in the army and later I married a rock musician and we travelled all over the world. Later we went into artist management and again spent our lives on the road, touring, recording and living overseas, mainly America, Singapore and Taiwan. So I imagine a lot has rubbed off.

They say write what you know, and I know the music business and, before that, life in the Foreign and Commonwealth Office in Whitehall – one end of the spectrum of experience to another. That is where my love of all things espionage comes from. My stories often have elements of espionage in them and lots of music. The music business provides great fodder for a crime writer, especially in Hollywood.

I have been typing since I was taught at school and so my handwriting has gone to pot – hand-written stories don’t happen. But I also hate sitting at the computer for hours and hours physically typing. I’d like to do a Barbara Cartland and have someone sitting at my right hand, taking my dictated stories down in short-hand and then typing them up. Fat chance though.

Whenever the urge is upon me, and that is often early morning. I might end up working all day until the early hours if I am left alone. It really does depend on outside forces. I have to force myself to have a life away from the desk. Of course if I run out of tea or liquorice – a major disaster – I have to replenish supplies or nothing works.

I have been asked this before and I am not sure I have an answer. I have nearly always been my own boss, in charge, so perhaps it’s not having to answer to anyone or being responsible for others.

When I managed the careers of singers, musicians, record producers and songwriters I had a lot of responsibility for their success and making sure they were given opportunities and made the most of them. It was uphill at times because some would sit back and wait for things to happen, rather than going after something themselves. If it succeeded, it was down to them, if it failed it was down to me, so they thought. Often, once management took over, the drive and ambition seemed to take a back seat with some of them.

I guess I like being able to motivate myself. I don’t answer to anyone and I don’t have to give someone else the credit or blame when/if things do or don’t pan out. And the flipside is just that, there isn’t someone to kick my backside, critique and guide, until my work is with the editor, but by then most of the hard graft has been done, by me, alone, and without a manager like me to encourage and cajole.

I enjoy social media, it has been a great tool in the past for helping to promote my artists and I see it as essential for my work too. I love technology so this medium is wonderful for me. I can explore opportunities I’d never encounter otherwise. It can be a chore, and one can become a slave to it, but I see it as a way to reach people.

I had to work with all media – radio, television, the music press and so on in my former life, and to me social media is an extension of that work, only it’s now on my own behalf. It is the fan club newsletter, the event flyer, the word of mouth story to other like-minded folk. It is like running a band or artist, but instead of testosterone filled musicians and PMS inflamed female singers, I have little old me beavering away trying to get seen in amongst all the other cans of baked beans on the shelf.

I’d be retired sitting back enjoying my freedom. I do enjoy the freedom from babysitting self-centred egoists I have experienced since deciding to get a life, so given the chance I would be relaxing on a yacht somewhere, with others to do my bidding for a change. Then again, I might get bored rigid and look for another artist to discover, mould and end up detesting. Nope, writing is a way of getting all those murderous thoughts and feelings out of my system and on to a page. I think I would still be writing and thus avoiding a stint in Broadmoor or similar. It’s safer I think.

If it were the last day and I wasn’t surrounded by family and friends who’d never give me a chance to get a word in, I suppose I’d disappear into the woods or sit by a lake, and if I could concentrate I’d read Frenchman’s Creek by Daphne Du Maurier, and wait for the mushroom cloud there. I certainly wouldn’t be under the kitchen table with black sacks and tinned food as instructed in the 1980s, by the Government, in the event of a nuclear attack by Russia. We all know that’s silly.

Please tell us what you are working on at the moment.

I am working on several projects at the moment. There’s my novel Ms Birdsong Investigates: Murder at Ampney Parva, part of a series, featuring a former MI5 Officer ‘voluntarily’ retired, and living in rural Oxfordshire, following a disastrous mission with her lover and partner MI6 Officer Michael Dante.  She finds herself embroiled in the search for a missing woman, the Russian Mafia and People Trafficking and Ukrainian Arms Dealers. This is going to be a series; books two and three are underway. They will be titled: Murder at the Observatory and The Safe House.

Awaiting completion by my co-author friend, Christina Jones, our novel based in the 1960s music scene, Only One Woman, is set to be published by our mutual publishers, Accent Press, early next year. 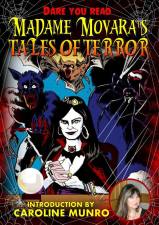 In the meantime I have a short story included in the anthology, Madame Movara’s Tales of Terror, which is on pre-order now via Amazon, and is in aid of Save the Children. It features many exciting authors and their stories, and will be in paperback in October and also on Kindle. My story is Haunting Melody and is music related. Here is the link for Madame Movara’s Tales of Terror with foreword by Hammer Horror Icon Caroline Munro. http://www.bookgoodies.com/a/B01JXDVHGK

Pam, thanks so much for having me here and for indulging me, it’s been a blast. I do hope your readers find something to whet their appetite for my work which includes:

Links to my books and publications can be found on my Amazon Author Page.

If you would like to know more about Jane and her work please click on the links below:

21 thoughts on “A Conversation with Author Jane Risdon”