Do you love historical fiction? What makes you choose one book over another? For most of us, the cover is the first thing that attracts our attention. For me, the cover has to look professional and must convey genre and a hint of what the story is about.

Each month I will be taking a look at historical fiction covers and choosing my ‘Pam’s Pick’ for the month. Hopefully, you will be intrigued enough to look beyond the covers I feature and find your next favourite author. If a cover interests you just click on the image to learn more about the book and buy if you wish.

My first winner is The White Camellia, by Juliet Greenwood. When this cover landed in my inbox, I knew immediately it would be one of my top picks. The image is beautiful, romantic and delicate. If I saw this in a shop I would pick the book up and read the blurb. This book is now sitting on my Kindle waiting to be read.

1909 – Cornwall. Her family ruined, Bea is forced to leave Tressillion House, and self-made business woman Sybil moves in. Owning Tressillion is Sybil’s triumph – but now what? As the house casts its spell over her, as she starts to make friends in the village despite herself, will Sybil be able to build a new life here, or will hatred always rule her heart? Bea finds herself in London, responsible for her mother and sister’s security. Her only hope is to marry Jonathon, the new heir. Desperate for options, she stumbles into the White Camellia tearoom, a gathering place for the growing suffrage movement. For Bea it’s life-changing. Can she pursue her ambition if it will heap further scandal on the family? Will she risk arrest or worse? When those very dangers send Bea and her White Camellia friends back to Cornwall, the two women must finally confront each other and Tresillion’s long buried secrets.

There was stiff competition for top spot this month, with the following being close runners-up:

Rise of the Wolf  – Steven A. MacKay

Yorkshire, England – 1323 AD
The greenwood has been quiet and the outlaws have become complacent, but the harsh reality of life is about to hit the companions with brutal, deadly force thanks to their old foe, Prior John de Monte Martini. From a meeting with King Edward II himself to the sheriff’s tournament with its glittering prize, the final, fatal showdown fast approaches for the legendary Wolf’s Head. New friends, shattered loyalties, and a hate-fuelled hunter that threatens to wipe out not only Robin’s companions but his entire family will all play their part in the Rise of the Wolf.

Rose rivals her beautiful, mercurial sister for Michael’s love but calculated lies and misunderstandings alter the young peoples’ course. War breaks and Michael is as eager as the others to go. Maybe Rose will settle for second best with Thom even though she cannot get Michael out of her soul. Does a man need the grace of serenity to rediscover his own or is it frivolity and seduction he craves when he has been through the darkest places of war? Michael’s experiences in the trenches gradually alter his perceptions. 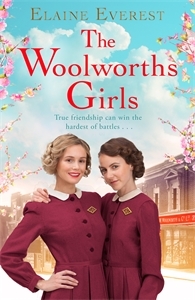 Can romance blossom in times of trouble?

It’s 1938 and as the threat of war hangs over the country, Sarah Caselton is preparing for her new job at Woolworths. Before long, she forms a tight bond with two of her colleagues: the glamorous Maisie and shy Freda. The trio couldn’t be more different, but they immediately form a close-knit friendship, sharing their hopes and dreams for the future. Sarah soon falls into the rhythm of her new position, enjoying the social events hosted by Woolies and her blossoming romance with assistant manager, Alan. But with the threat of war clouding the horizon, the young men and women of Woolworths realize that there are bigger battles ahead. It’s a dangerous time for the nation, and an even more perilous time to fall in love …

.
Watch out every month for the next featured selection of great covers, and don’t forget, if you read and book and love it, post a review and make an author very happy.
And the not so small print: the judge’s decision is final (that would be me!)
and is highly subjective!

Homeward bound after a lovely trip. Thanks to Jenny O'Brien for being such fun company. Harper Collins party was a blast and lovely to finally meet up with so many author friends, face to face. #London #HarperCollins #pamleckybooks #avonbooksuk
London bound today for the Harper Collins summer party 🥳