Louisa Campbell, my female protagonist in The Bowes Inheritance, didn’t materialise out of thin air – she had a past. Back stories give your characters more flesh and bone, so sprinkled throughout my tale, the reader slowly learns about Louisa and her family’s past and where they lived.

As I have family connections and a deep love of the west of Ireland, it was probably inevitable that I would choose this area as the home of this typical Ascendancy family. A crucial part of character development is that I have to be able to visualise their world and to this end, besides being fun, I spend a lot of time on research for all my locations. Without the benefit of time travel, that meant looking up the Landed Estates Register set up by NUI Galway, browsing good old google and checking out Archiseek.com and similar websites.

And I was spoilt for choice …

END_OF_DOCUMENT_TOKEN_TO_BE_REPLACED

In my novel, The Bowes Inheritance, there is a brief glimpse of life in Angel Meadow, Manchester, where Fenian sympathies ran high and lawlessness prevailed. 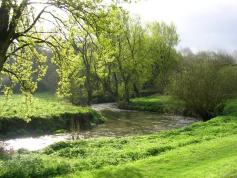 The area was undoubtedly named for its idyllic scenery on the banks of the River Irk. However, the Industrial Revolution with its factories and workers’ houses soon swallowed up those verdant pastures. At the height of its notoriety, it became known as one of the worst slum districts in the United Kingdom. Today, regeneration has restored some of the area and Angel Meadow is now a public park – a far cry from a nineteenth century, rather chilling, description of the area:

“The lowest, most filthy, most unhealthy, and most wicked loca

lity in Manchester is called Angel Meadow. It lies off the Oldham Road, is full of cellars and is inhabited by prostitutes, their bullies, thieves, cadgers, vagrants, tramps, and, in the very worst sites of filth, and darkness.”  (Image copyright Manchester Libraries)