This evening in the Library I am delighted to have my friend and fellow historical fiction author, Suzy Henderson, who has dropped in to say hello and to share some insights into her life as an author.

It’s lovely to meet you again, Suzy, please introduce yourself to our audience:

I live with my husband and two sons in Cumbria, England, on the edge of the beautiful Lake District. I never set out to be a writer, although I have always had an insatiable appetite for books.

Some years ago after leaving an established career in healthcare, I began to research family history, soon becoming fascinated with both World War periods. After completing a degree in English Literature and Creative Writing, I took a walk along a new path, writing from the heart. I write historical fiction and have an obsession with military and aviation history.

My other interests include music, old movies, and photography – especially if WW2 aircraft are on the radar. I am a member of the Historical Novel Society and my debut novel, The Beauty Shop, was released yesterday, 28th November 2016.

As a child, I was an avid reader and can remember at the age of eight, having to go to bed early because of school the next day, and all I wanted to do was read. So, out came the torch and under the duvet I went – I was terrible, but the thing is, it fed my imagination, and I can remember almost as vividly today just how fantastic that felt. Books can give us such a buzz, and I love how you’re so easily transported to another time and place.

I have always been a reader although there were times when work encroached on that, but well before I wandered into writing, I began to read frequently and now it’s a daily routine.

As for genres, well I can quite happily cross those boundaries. It’s quite revelatory as I’m discovering books I wouldn’t have looked at twice years ago. I read contemporary romances, historical fiction, fantasy, thrillers, and crime. I haven’t attempted horror as yet, but then I don’t like watching horror films either so maybe that’s one area that will remain out of bounds.

I’m self-published, and it’s been quite a journey. Before I made the decision to do this, I had what I thought was a good grasp on the self-publishing process, but boy was I wrong. What I hadn’t realised was just how much work was involved. It’s relentless and increases the pressure on writing time.

I write historical fiction, which in itself covers all historical periods, but I’m particularly focussed on both World Wars. “The Beauty Shop” is set during the Second World War and I seem to have a natural affinity with this period, although I’m not sure why. About ten years ago I decided to look into my family history which led to some military research, and I subsequently came across so many people, and stories I’d never heard of before, and I was entranced. It became an obsession, and I simply couldn’t walk away. I remember thinking, “Why do I not know about this?” However, the fact is, there is so much information out there and it’s almost impossible to know everything unless of course, you are a historian. My passion for history and for the brave men and women I had encountered led me to write as it seemed sad to leave their stories buried and dishonourable.

Well, this is always tricky because there are so many, but I’d probably cite Pat Barker, who has written a number of novels, but is perhaps very well known for the Regeneration trilogy, set during the First World War. These books are brilliant, and when I read Ghost Road, I was quite literally ‘blown away.’ The writing is so simple, yet masterful, and I love how Barker weaves fiction seamlessly with real and fictional characters.

I always cite a second author because while Pat Barker had a significant influence, Hilary Mantel had an equally important influence at the very beginning of my writing journey. In her autobiography, “Bringing Up the Bodies” she mentions how she fell into writing. She states how she knew she could write well, but had never written fiction and had to learn. Well, this was revelatory because of the age-old debate about writers and creative writing courses. Can fiction writing be taught? Well, Hilary helped me to see that if you can write then you already have some of the tools to work with. You simply need to embark on the apprenticeship and learn on the job to polish your craft.

I suppose from one perspective it must have. Having been raised in Britain, I’m used to our culture and our historical past and so yes, I feel it does influence and shape the writing. That said, having done an enormous amount of military research, I’m also drawn to other countries, such as America, France, and Germany in pursuit of stories from both World Wars.

I don’t think I can name one thing. Most of the time I just get on and write and it’s great, even if the writing isn’t! However, sometimes I get stuck, and I hit the wall running, and it might just be a bad writing day or it might be a particular character, and I’m uncertain how to advance with him or her. First of all, I listen to music which is therapeutic and helps me create. If that doesn’t work, a little time out and then putting pen to paper and making notes or re-planning usually does the trick. It’s a case of finding something that helps so it’s trial and error. Either way, I’m not usually stuck for long.

Oh yes, absolutely. The best time for me is early morning and late evening, even going beyond midnight. I love it, probably because these are the most peaceful times. During the day it’s disrupting with phone calls, life in general and trying to keep up with marketing and social media.

The best thing is living the dream through the stories you write. I’m writing the books I want to read, and it’s incredible.

The worst thing is spending so much time away from family because of writing pressures and also the fear of failure.

It’s both. I particularly love Twitter – it’s so easy to reach more people for one thing, and it’s great to meet so many people online all around the world. I love it, even though I’ll admit it’s a struggle to keep up. Facebook is okay, but I’m not as active there simply because I find Twitter easier to navigate and use and it comes down to time. I do use Google Plus and LinkedIn but minimally.

What I have learned is while it might be time-consuming, social media is ideal for advertising you –not just your books, but you as an author and as a person. Speaking from the perspective of a reader, I like to see the person behind the author as it’s interesting and so we can show that side on the various social media platforms. I have conversations on Twitter about lipstick, 1940s fashion, and the Pyramids – it’s such a diverse, interesting and fun arena.

I used to be a Midwife, so I’d probably still be bringing new life into the world. I had good times and sad times, and while I still miss it occasionally, it was the right decision to leave, and I’m even happier now I’m on this particular path.

That’s a tough question now. I’m tempted to say Ghost Road, but Colm Toibin’s Brooklyn is beautiful. I’ve seen the film adaptation which I loved, but the book is far superb.”

My novel, The Beauty Shop is set during World War Two and is a blend of fact and fiction, featuring the real Archibald McIndoe, a New Zealand plastic surgeon who ran a burns unit in East Grinstead, Sussex during the war, appointed by the RAF. He cared for severely 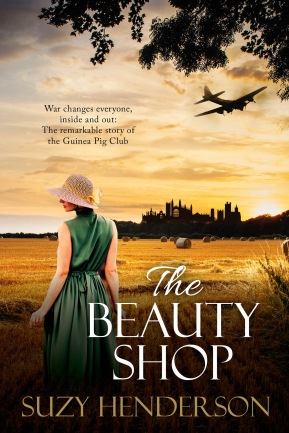 burned airmen and had many unique ideas and rocked the formal establishment just a little. The men he cared for formed a club, known as the Guinea Pig Club and this brotherhood of veterans has been meeting annually ever since its inception in July 1941. Out of 649 members, only 17 remain. Incidentally, 2016 is the 75th anniversary of the Guinea Pig Club.

The reason this caught my eye around six years ago, was that rather than hide disfigured men away from the public, which was the norm back then, Archie pushed them out into society. He wanted them to live their lives, and to be able to confront the public. Archie felt the public had to get over themselves; they had to learn to see such men if they were ever going to accept them. He was right, and while things are much better today, it’s still not perfect, but I believe the progress that has taken place has its origins rooted in 1939 onwards when Archie’s ‘war work’ began.

In nursing today, students will learn of holistic models of care. Well, Archie’s model of care was perhaps the first holistic model, and it worked. He took severely depressed and sometimes suicidal young men and managed to turn them around. It sounds an exaggeration, but in many cases, he quite literally gave them their lives back, and they lived good lives, thanks to one extraordinary, talented man.

If you would like to know more about Suzy and her work please check out the links below:

4 thoughts on “A Conversation with Author Suzy Henderson”