Today in the Library we have ­­­­­­­­­­­­one of my favourite authors, John Bainbridge, who has dropped in to say hello and to share some insights into his life as an author. 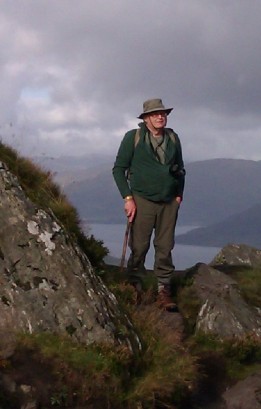 You are very welcome, John, please introduce yourself.

Thank you for inviting me to your blog, Pam. I’m John Bainbridge. I’ve written books in three historical periods, and autobiographical works about my passion for walking in the British countryside

I write historical mystery thrillers about a Victorian crime fighter called William Quest, who is really a vigilante outside the law who fights against social injustices. I’ve written three Quest novels so far and have just begun the fourth. I’ve also written two novels about a character called Sean Miller, who fights the Nazis in the 1930s. My third series, now complete, is a tetralogy of novels about Robin Hood, The Chronicles of Robin Hood, which tries to root the famous outlaw in medieval reality.

I read books in all sorts of genres, non-fiction as well as fiction. My favourite authors are George Borrow, Daniel Defoe and John Buchan, but I also love pulp fiction authors. I usually read several books at the same time.

In the past I wrote a number of books for a conventional publisher, all non-fiction, but with the novels I chose to go Indie. I like the self-control and the better royalties. Though I’d be happy to consider any decent publishing deal in the future, I’d never want editorial interference with the way I write

Probably John Buchan, who I can re-read over and over again. But there are so many writers who have influenced me in different ways. I like picaresque writers, and Daniel Defoe and George Borrow were also early influences, as was Shakespeare and Dickens. I still re-read writers I discovered in childhood, such as Arthur Ransome and Alan Garner.

I’ve worked in the past in journalism, where if you don’t do the work, you don’t make any money, so I just sit down and write. Having to pay the bills is a great source of inspiration. I hate doing all the administration that goes with the writing life.

I write first thing in the morning, usually up to 1000 words. Then I run out of steam. In my freelance journalism days, I used to work much longer hours, but not anymore. By the time I fnish my morning shift I’ve done enough.

I’d be spending more time reading books and walking in the countryside. When I was young I wanted to be an actor or a film director. I think if I started again I’d be a lecturer in English Literature or social history, or an archaeologist. I never really had great ambitions to be a writer, I just always did it.

If you could travel back in time, what era would you go to? What draws you to this particular time?

It would be nice to go back to Victorian times, as I could understand the mechanics of living there and then. Much of what I like about the Victorian era is that we can still walk through places they would recognise. Look above awful modern shop fronts and you can still see buildings Victorians would recognise. And British social conditions and injustices seem to be heading back to the Victorian worst of worlds.

You have been chosen as a member of the crew on the first one-way flight to Mars – you are allowed to bring 5 books with you. What would they be?

My latest book is Dangerous Game, a Sean Miller thriller set on Dartmoor in 1937. Here’s the description:

“Sean Miller – a rogue of the first water; a former Army sniper, he seems unable to stay out of a fight. Sean Miller’s on his way back to fight in Spain when he’s diverted to Devon to undertake a mission for renegade members of the German Secret Service, trying to stop the Nazis plunging the world into war. A secret agent lies dead in a moorland river and the one man who can keep the peace is an assassin’s target. As the hunter becomes the hunted in an epic chase, Miller encounters his greatest enemy in a dangerous game of death across the lonely hills of Dartmoor.

A fast-paced action thriller by the author of Balmoral Kill and the William Quest adventures.”

My Amazon author page, which lists all my books, is at https://www.amazon.co.uk/John-Bainbridge/e/B001K8BTHO/ref=dp_byline_cont_ebooks_1

I have a writing and books blog at www.johnbainbridgewriter.wordpress.com

And write about walking and the countryside at www.walkingtheoldways.wordpress.com

4 thoughts on “A Conversation with Author John Bainbridge”