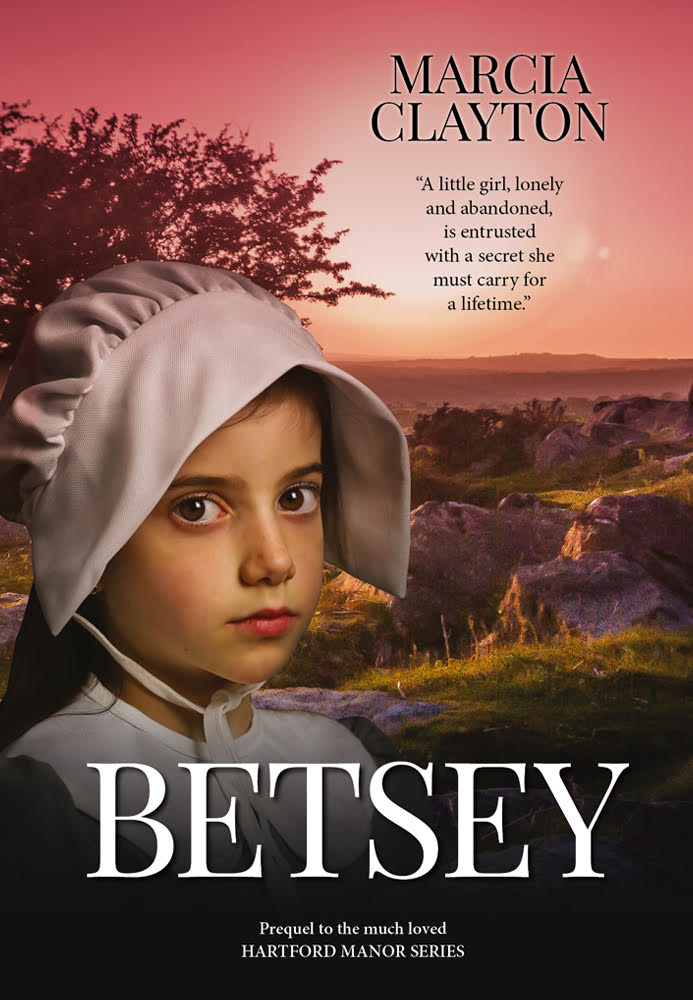 Marcia Clayton is on the blog today to tell us about her new release, Betsey, and to share an excerpt (below).

A little girl, lonely and abandoned, is entrusted with a secret she must carry for a lifetime.

1820
Betsey, a sadly neglected child, is shouldering responsibilities far beyond her years. As she does her best to care for her little brother, Norman, she is befriended by Gypsy Freda, an old woman whose family is camped nearby. Freda’s granddaughter, Jane, is also fond of the little girl.

Thomas Fellwood, a young gentleman, happens across the gypsy camp and becomes besotted with Jane. However, Jasper Morris, the local miller, also has designs on the young gypsy, and inevitably, the two men do not see eye to eye.

Betsey is drawn into their rivalry for the attention of the beautiful young woman, and she finds herself promising to keep a dangerous secret for many years to come.

A Little Bit about Marcia …

Marcia is a wife, mother and grandmother and loves nothing better than to curl up with a good book. She enjoys researching her family tree, and it was her love of genealogy that inspired her to write The Hartford Manor Series. Living in Devon in the South West of England, Marcia also enjoys walking in the picturesque countryside.

Although Betsey is Marcia’s fourth book, it is also the prequel to the other three books in The Hartford Manor Family Saga:

Annie Carter is a farm labourer’s daughter, and life is a struggle for survival. When her father dies of consumption, her mother, Sabina, is left with seven hungry mouths to feed. To save them from the workhouse, Annie steals vegetables from the Manor House garden, risking jail or transportation.  Set against the harsh background of the rough, class-divided society of Victorian England, this heart-warming novel portrays a young woman who uses her determination and willpower to defy the circumstances of her birth in her search for happiness.

When Fred Carter, finds a young woman in dire straits by the roadside, he takes her to the inn where she gives birth to a daughter. Charlotte is unmarried and has run away from home. A few days later, Fred takes Charlotte to her aunt’s house and does not expect to see her again. However, when their paths unexpectedly cross, Fred finds Charlotte distraught as her aunt has arranged an adoption behind her back. Charlotte is desperate to find her baby and Fred promises to help but they are unprepared for the sinister discoveries that lay before them.

Set in the small seaside village of Hartford, this book tells the tale of how an old man, who has spent his life with barely a penny to his name, suddenly finds himself rich beyond his wildest dreams. However, there is only one thing that Sam Fellwood truly wants, and that is to be reunited with his son, Marrok, whom he abandoned at the age of five.

Find out more about Marcia and enjoy her monthly newsletter, plus a variety of blogs on her website:  https://marciaclayton.co.uk/

You can also download a FREE short story which is a spin-off from The Mazzard Tree. Amelia, a little orphan girl of 4, is abandoned in Victorian London. To find out what happens to Amelia, download the story here:

“Hello Betsey, what are you doing out on such a cold morning? You need a thicker coat, this morning. Aren’t you cold?”

The child’s nose was red and she was shivering violently. “Aye, sir, I am cold, but these are the warmest clothes I have. I’m on my way to see Gypsy Freda; I’m hoping she might spare some food for me and my brother, Norman.”

“I see. Well, I’m not going all the way to the gypsy camp, but I can take you part of the way. Would you like to ride up here with me, again? I can wrap my cloak around you, and warm you up a bit.”

Thomas dismounted and lifted the child onto the horse, then clambered up behind her. He pulled his cloak open and wrapped it around her, and they set off, Betsey enjoying the warmth of his body and that of the horse below her. A little of the feeling began to return to her icy feet, making them hurt as they thawed, and she hastily brushed a few tears from her face, hoping he hadn’t noticed.

“I know your mother died, Betsey, but does your father not provide food for you?”

“No, not much, sir; he’s at work most of the time, and he doesn’t always come home, so we’re on our own a lot. I’m trying to look after my little brother, Norman, as best I can, but it’s difficult. Aunty Kezzie, from next door, has been looking after us since Mum died, but Dad had an argument with her last week and said she can’t come to our house anymore, so things are worse than ever at the moment. I’ve had to leave Norman at home on his own this morning because his shoes are even more worn than mine, and he can’t come out in this cold weather. It’ll be all right, though, I’m sure Gypsy Freda will help; she’s always been kind to me.”

Thomas could not believe a father could be so neglectful of his children and resolved to have a word with his own father to see if anything could be done. However, while he was perusing the matter, they heard a sharp scream from up ahead.

“Hold on, Betsey, I think we’d better find out what’s happening; it sounds like someone’s in trouble.”

One thought on “New Release from Marcia Clayton”