It’s all very well to have a great story but it’s your characters who are going to tell it for you.

Besides an overdose of historical detail (which can come across as patronising), a common irritant for me as a reader are characters that are so wishy-washy that you want to slap them … very hard. I have a dread of mousey heroines or nice heroes. One of my favourite authors is Georgette Heyer. But I find that the Heyer novels I read over and over are the ones with at least one strong protagonist, and more often than not, two, and they are usually at loggerheads for most of the novel.

Admittedly, when I started writing I didn’t really care much about an audience as I was writing purely for myself, never dreaming that I would someday be confident enough to publish. But once that idea came closer to reality, I did put a lot of thought into character development. It was important for me to come up with detailed back stories, even though after the first draft, most of that material was jettisoned. I think it is important for the reader to get glimpses of these rather than your book getting swamped with them. I like to use tiny snippets of flashback or reminiscing about the past to achieve this.

So then I had to think about what makes a character engaging, which meant analysing what I found interesting in the characters I like in my favourite books. It seemed to me that the characters with personality flaws or quirks were by far the most interesting – the more a character had, the more I could relate to them. Flaws add flesh and bone and make you think – that could be me saying or doing that. Above all, your characters have to be real, and for this genre, they have to be authentic for their time. For the author this means a lot of research and reading a lot of works from that time period. I find listening to music of the period, studying art and old photographs (luckily for me my favourite period is 19th century), helps me to get inside the heads of all of my characters; once you achieve that, it becomes a lot easier to tell their story.

So let me introduce my two protagonists.

Firstly, say hello to Louisa Campbell. She’s no ordinary Victorian miss. In fact, she is the product of a life far removed from what he 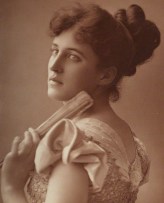 r heritage would suggest. Born to the last heir of an Irish ascendancy family, she never experienced the rights and privileges of her peers. Her father inherited a bankrupt property, gambled the pittance that was left and on his death, left his two daughters struggling to survive, moving from lodging to lodging in the less elegant quarters of 1880s Dublin. Genteel poverty is a knife-edge world and Louisa has to deal with all kinds of individuals most ‘ladies’ of the time would have shrunk from in horror. After encounters with grasping landlords, haggling with pawn-brokers and having to protect herself and her sister, she has become a resilient and self-reliant young woman. Taking care of her sister who is ill, has taught her patience and how to curb her impetuosity (but never fear, it is always bubbling away just beneath the surface). Every penny they have has to be eked out to cover rent, food and doctor’s bills, so she has a firm grasp of the basic economics of living. By the time Louisa inherits her previously unknown uncle’s estate, she is already a strong, independently-minded woman and probably more worldly-wise that most woman of twenty-three at the time.

l, Esq. Leader of local society, Justice of the Peace and businessman, he is self-assured and fairly sure he can handle anything life throws at him. However, beneath the confident manner he is hot-tempered, holds grudges and doesn’t suffer fools. Louisa’s late uncle was a thorn in his side and he can almost be forgiven for rejoicing in that man passing through the pearly gates. He is delighted to have an opportunity to buy back the Campbell property which had once formed part of his estate but which his father had lost in a game of poker. He discovers that Campbell’s heir is a penniless Irishwoman and is sure that she will sell up. Nicholas cannot believe it when his approaches to Louisa are rebutted and she moves into Bowes Farm and leaves him in no doubt that she is a worthy advisory. A state of war is declared. Fireworks can only ensue … and they do.

The premise for The Bowes Inheritance was a wrangle over land and a strong woman fighting to keep it. But I have always been fascinated by the strange relationship between the Irish Ascendancy and their British counterparts. The Ascendancy were regarded as the ‘quality’ by the native Irish (though not necessarily loved!) and yet they were seen as second-rate by the gentry in England. I thought this would make an interesting background for my story. So I threw my heroine into a society predisposed to be suspicious of her. Then I added the Fenian bombing campaign that was raging at the time and set it in the beautiful Cumbrian countryside. The result was a battle-royal between two strong-willed and volatile protagonists. Hey presto, my book was born!

The Bowes Inheritance is available on Amazon (ebook or paperback).