If you enjoyed a good old execution in the 18th or early 19th century, it was possible to buy a crime broadside at the hanging which was produced by specialist printers. These would feature a crude picture of the crime and the culprit, a written account of the crime and trial proceedings and a doggerel, thrown in for good measure. Most of the poor could not read but they enjoyed the lurid pictures, and there was always someone on hand to read out the cautionary poem. 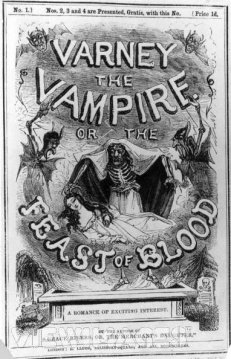 During the Victorian era, however, literacy rates increased. Combined with technological advances in printing and the advent of the railways making wide-spread distribution viable, the demand for cheap, entertaining reading matter increased rapidly. This led to the first penny serials (originally called penny bloods) being published in the 1830s, and by 1850, there were over 100 publishers of penny-fiction. The penny dreadfuls were printed on cheap wood pulp paper and were predominantly aimed at young working class men and boys. They usually had eight pages with black and white illustrations on the top half of the front page. Working-class readers could afford these and they did a roaring trade. In contrast, serialised novels at the time, such as Dickens’ work, cost a shilling (12 pennies) per part and were out of the reach, therefore, of most working class readers.

The subject matter of the penny horrible, penny awful or penny blood was always sensational, usually featuring detectives, criminals or supernatural entitles. Popular characters included Sweeney Todd – The Demon Barber, first printed in 1846, who murdered his clients so his neighbour, Mrs Lovett, could cook them in her meat pies. Then there was the endless retelling of Dick Turpin’s exploits and his supposed 200 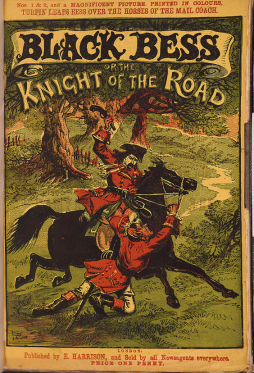 mile ride from London to York in one night! Supernatural characters, such as Varney the Vampire were extremely popular. But the most successful of all time was the Mysteries of London, first published in 1844. It ran for 12 years, 624 numbers (or issues) and nearly 4.5 million words.

Many famous authors began their writing careers writing penny dreadfuls including, GA Sala and Mary Elizabeth Braddon. She reputedly said “the amount of crime, treachery, murder and slow poisoning, and general infamy required by my readers is something terrible.” Many authors took the melodrama of the dreadful and infused it into their later very successful novels.

When highwaymen and evil aristocrats fell out of fashion, true crime, especially murder, was the most popular. These were then overtaken in the popularity stakes by detective stories with the focus on the police rather than the criminal. By the 1860s, the focus changed again and children became the main target audience.

It was easy for the middle and upper classes to look down on the penny dreadfuls as cheap, sensational nonsense. Some even went to far as to blame them for infamous crimes and suicide. But I suspect many read them surreptitiously – for who doesn’t enjoy a good yarn now and then?

In No Stone Unturned, Lucy’s maid, Mary, is huge fan of the penny dreadfuls and cheap sensational novels. Lucy, feeling obliged to look out for her maid’s moral welfare (so she claims!), often reads these books and thoroughly enjoys them, too. When the women’s lives are in danger, Mary comes to the fore with her penchant for intrigue and spying. Lucy suspects Mary’s favourite reading material may be at the root of it.

No Stone Unturned is the first book in the Lucy Lawrence Mystery Series.

When her late husband’s secrets spill from the grave and her life is threatened by the leader of London’s most notorious gang, Lucy must find the strength to rise to the challenge. But who can she trust and how is she to stay out of the murderous clutches of London’s most dangerous criminal?

3 thoughts on “Penny Dreadfuls – Only a Bit of Fun?”